Real Madrid are returning to their den after a long gap of 561 days. The Los Blancos are set to take on Celta Vigo in the league at a renovated Santiago Bernabeu. Though the stadium is not renovated completely, it is partially finished to host games and allow the work to take place parallelly. The renovation of Santiago Bernabeu is the dream project of President Florentino Perez.

The workers and project managers are working round the clock to finish the work on time to host the game against Celta Vigo. Real Madrid have used the reserve ground of Alfredo di Stefano for the past two years. Thanks to the stellar efforts of the workmen, they can now move back to a renovated state of the art Santiago Bernabeu. The renovation was supposed to be finished by June 2023 but due to the pandemic, the works moved at an incredible pace and the stadium would be completely open for the fans by the end of 2022.

🚨| Real Madrid will play against Celta Vigo at Santiago Bernabeu on September 12 in front of 32000 fans. @diarioas pic.twitter.com/t1tN8IazOl

The new stadium is said to be a world-class one that echos the status of the club. It is built not only to be a football stadium, but also a total economic centre that would generate revenues throughout the year with other events. In no way will those other events would interfere with footballing interests as the club going forward.

Located at the heart of Madrid, Santiago Bernabeu is a majestic structure in the Chamartin district. The stadium has an in-game capacity of 81,044. It has been home to Real Madrid since its completion in 1947. Bernabeu is the second-largest stadium in Spain after Camp Nou and the third largest in entire Europe.

The stadium is bathed with history in every nook and corner as it saw legendary players grace its turf. Galacticos have used its training rooms and its trophy museum was a thing of envy to any club in the world. Their resounding three-peat success in the Champions League prompted President Perez to have a bigger aim for the club. He felt that a new and bigger stadium was required to represent the team and gave a green light for the renovation. The work started in 2020 as Madrid played their last match against Barcelona on March 1st. 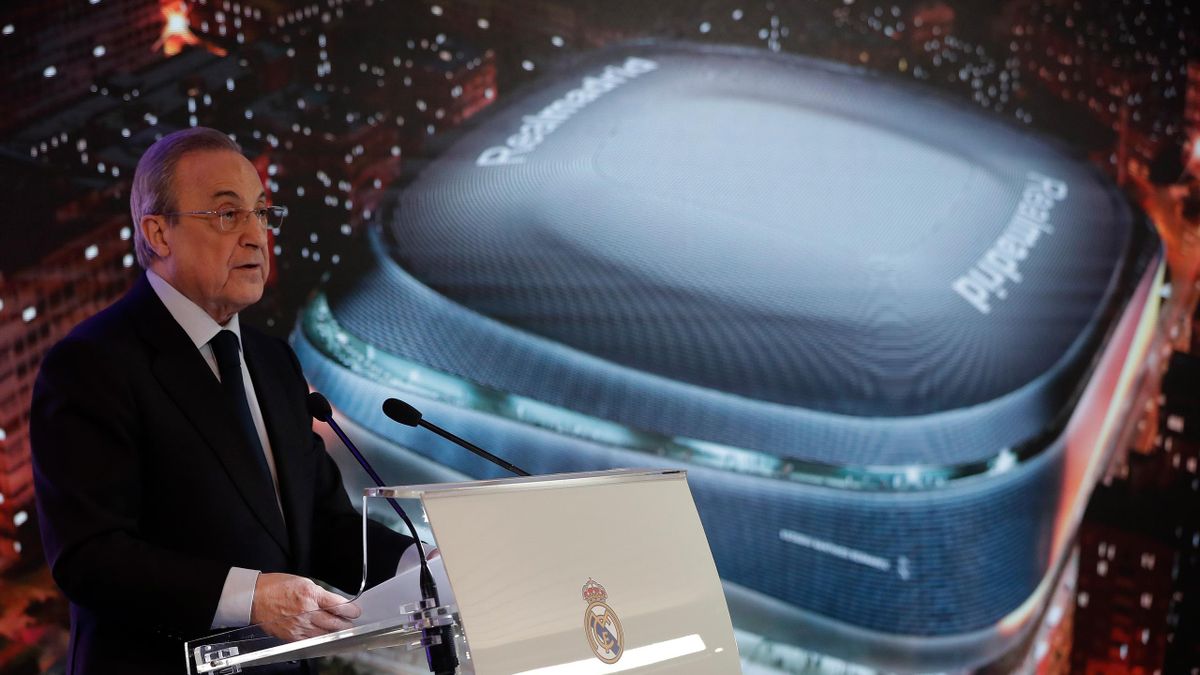 He said: “The new stadium will continue to be the setting that generates the emotions which will leave their mark on Real Madrid’s future. It’ll be the best stadium in the world in which to see us once again recognised at the end of the century as the best club of the 21st century. It’ll offer a new stadium, heritage and be a new source of pride for our members and fans”.

The club invested heavily in the new project with the cost estimated to be around €800 million. They secured a loan amount of €575 million from American finance giants J.P. Morgan and Bank of America. GMP Arquitectos and L35 Ribas successfully secured the tender to oversee a revamp of a stadium that is poised to become a global role model.

The pandemic hit the clubs finances badly and Perez was determined to not let it hamper the renovation of Santiago Bernabeu. Through the sale of players and restraint in the transfer market they have continued to invest in the stadium. With the renovation nearing completion, Perez wants to unveil his dream grandly in front of the world.

STATE OF THE ART STADIUM

The renovation is said to make Santiago Bernabeu a modern, comfortable and safe arena and will enhance its leisure, restaurant and entertainment areas. Technology is the name of the drive used to renovate the stadium as the new stadium promises to be a state of the art one.

A world-class turf is being laid to help the footballers play to their strengths. On the pitch experience will be enhanced for the players. But it is the off the pitch that would catch everyone’s eyes and especially those visiting the stadiums. 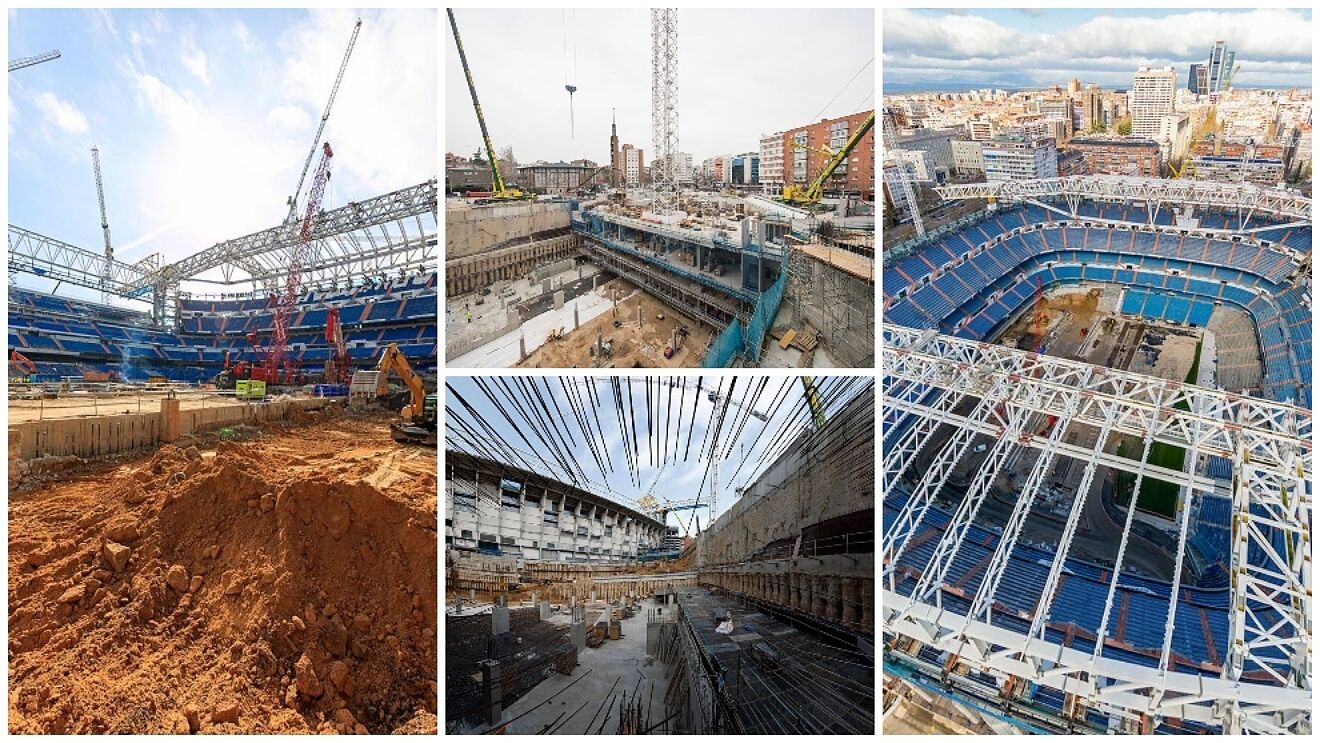 A premium feature will be the stadium’s wrap-around facade, which will consist of strips of steel and stripes that can be lit up and upon which images can be projected. The stadium also has a retractable roof that can completely cover the stadium including all the seats. The retractable roof only takes 15 minutes to open and close and has a huge projector that can project in 360 degrees. They can be used to project players and display score lines on the pitch which can be viewed by absolutely everyone in the stadium.

The club plans to make the renovated Santiago Bernabeu a digital stadium to enhance the matchday experience of everyone at the stadium. These would guide the fans at every stage of the stadium and also let them access exclusive content on their mobile phones making it a second pitch. The VIP section is also given a major rejig to serve the guests with supreme hospitality.

The stadium complex is said to have an E-Sports arena making it compatible with hosting world tournaments. Besides, the retracted roofs and other lavish spaces in the stadium might make it host Madrid’s basketball team as well.

The prestigious Museum of Real Madrid is also undergoing a massive revamp. It will be centred around the Paseo de la Castellana area. The museum will be extended in size and will have a new interactive section featuring the latest virtual-reality technology. These would encourage the stadium tours and generate more revenue.

With the demolition of previous restaurants and shopping complexes, better ones are being constructed. Two shopping complexes are a part of the renovation plan with them housing all of the worlds leading gadgets as well as the club’s official products such as kits and merchandizes. These will promote activity and business throughout the year in the complex.

The renovated Santiago Bernabeu has no main entrance as all the 57 gates are important with the gate on the Castellana side acting as a welcome gate. The complex is filled with escalators and elevators that accommodate a fluid movement of fans within the stadium. Besides, the builders are confident that the stadium is built to guarantee the safety of its visitors with the scope of easy evacuation thanks to its multiple entries and exit points.

Outside the stadium, a new exclusive tunnel system is built for logistics and goods without disrupting the public convenience. The complex also has a new parking system that houses team buses and fan vehicles.

All in all, the Santiago Bernabeu after its renovation would be a vibrant centre for the Madrid community teeming with business and activities throughout the year irrespective of the footballing season. It would also represent Real Madrid’s history and legacy to the world.

Once unveiled, the club expects an increase in revenue by €150M arising from the boost in the matchday, commercial and marketing incomes.

ℹ️🏟️ Information about ticket sales for matches at the Santiago Bernabéu.#RealMadrid

Real Madrid are now set to host Celta Vigo on September 12th at the partially renovated Santiago Bernabeu. Due to the ongoing work, the capacity is reduced to 50,000. But due to the existing covid protocols, the stadium is estimated to allow up to 30,000 fans.

With mere days away from kickoff, videos of laying of turf and watering are in full swing. People in and around Madrid are excited about the ongoing renovation of Santiago Bernabeu.

After nearly two years, Real Madrid put their step on their home turf and would look to make a winning return to mark its partial opening.