Former Essex player Jahid Ahmed tells Sky Sports News he experienced racism and bullying throughout his time at the club. Warning: some viewers may find words and phrases in this video offensive or upsetting

Former Essex player Jahid Ahmed tells Sky Sports News he experienced racism and bullying throughout his time at the club. Warning: some viewers may find words and phrases in this video offensive or upsetting

Jahid Ahmed has become the latest former Essex player to allege he was the subject of racist abuse while playing for the club, and told Sky Sports News he was “never made to feel better” throughout his spell with the county.

In an interview with The Cricketer published on Monday, Ahmed said he concluded that Essex was “a white man’s world where brown people were outsiders” after being asked by a team-mate if he was “going to bomb” the club.

The 35-year-old also says his voice was mocked and mimicked by both players and some members of the coaching staff and that he felt pressured to attend a team meeting in a pub while he was fasting during Ramadan.

Former fast bowler Ahmed played seven first-class matches between 2005 and 2009 during his time at Essex.

One of Essex’s ‘platinum level’ sponsors, Seetec, has since cut ties with the club with immediate effect. 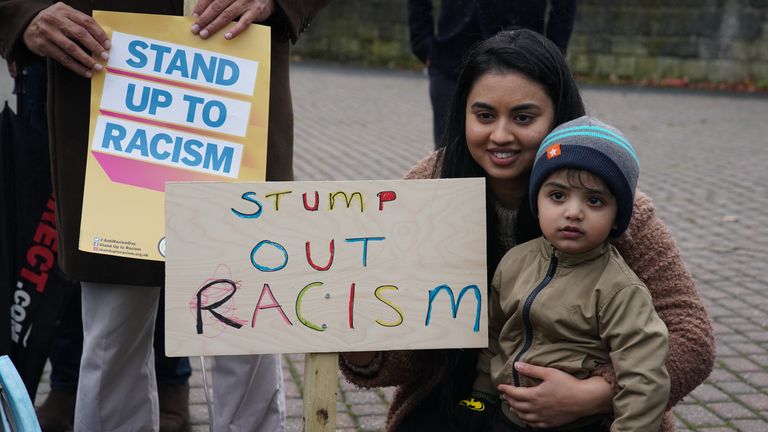 Speaking to Sky Sports News on Tuesday, Ahmed said he experienced racism from an early age, with the P-word used by opponents to put him off.

He added: “After that, I was lucky enough to play for Essex and went on to join the main squad when I was 19. The environment we went into straight away was very toxic. The word ‘curry-muncher’ was the first word I heard when I went in. I used to ask some of the senior players, and they said ‘don’t worry about it, just focus on your cricket’.

“The person who used to say those words, we used to ask him why, and he would turn around and say ‘because you guys stink of curry’. It’s obviously a horrible thing to experience.”

Ahmed said he was young and “too scared” to speak out, fearing it would jeopardise his contract with the club, and he also alleged there were issues with bullying at Essex as well as racism.

He said: “It wasn’t only the racism, a lot of bullying was going on, there was a lot of class issues. Mimicking, taking the mick out of personal things, those things were hard to take on.

“It felt like I was in a school getting bullied by a bully, you try and avoid that bully and that’s how I felt when I was in the dressing room. I used to get picked on for my voice, they used to make a mockery out of it and put on a Chinese accent. That continued until 2009.”

The new development follows allegations made earlier this month by former Essex batter Zoheb Sharif, who said he received racist abuse that included being called “bomber” by his team-mates after the 9/11 attacks in the United States.

In response to Ahmed’s allegations, Essex chief executive John Stephenson said in a statement: “I am disheartened to learn of these new historic racial allegations from a former player about several of his ex-teammates and a previous member of staff.

“The allegations reported to The Cricketer make difficult reading and they will be treated and investigated with the utmost seriousness.

“I have reached out to him to offer him our full support, and I hope he feels encouraged and comfortable enough to be a part of our imminent investigation.

“At the end of last week, we announced that the club will be working with Katharine Newton QC to focus on these allegations which have recently come to light.

“Ms Newton specialises in employment and discrimination cases and has widespread experience covering an extensive range of issues.

“Having someone of this stature looking into these allegations will allow us to complete a thorough and detailed independent investigation.

“During the short time I’ve been back at the club we’ve made significant steps and I’m determined to tackle this head-on and improve our game for the better. ECB chief Tom Harrison says he wants to lead cricket through its racism scandal and has received backing to do so, after a meeting of the sport’s counties and governing bodies

ECB chief Tom Harrison says he wants to lead cricket through its racism scandal and has received backing to do so, after a meeting of the sport’s counties and governing bodies

“It is clear as a sport there is a lot of work to be done, but we are moving in the right direction. The next period is going to be extremely difficult, especially for those sharing their experiences, but together we will come out the other side better for it.

“We pride ourselves on our multicultural and diverse values and we hope the outcome of the investigation will help us improve and develop us as people and as a club.”

Ahmed told Sky Sports News that Stephenson had reached out to him to offer his support, adding: “A positive email I had yesterday was from the development manager who wants to make changes at grassroots level and how they can get me involved to make things better. I thought that was a positive approach.”

John Faragher resigned as Essex chairman on November 11 following a claim he used racist language at a board meeting in 2017, which he strongly denied.

Cricket has been engulfed in a racism scandal initially prompted by allegations made by Azeem Rafiq, who spoke about his experiences of racism at former club Yorkshire.

Yorkshire was widely condemned for saying it would not discipline anyone despite a report finding Rafiq was a victim of “racial harassment and bullying”.

Rafiq aired his full and harrowing allegations in the public arena at a Digital, Culture, Media and Sport select committee hearing earlier this month.

A commission looking at discrimination in cricket has been “inundated” with more than 2,000 responses in the fortnight since it opened a call for evidence, its chair has said.

The Independent Commission for Equity in Cricket (ICEC), set up by the England and Wales Cricket Board in March, opened an anonymous online survey on November 9 asking for people’s views on the culture of the game.

Commission chair Cindy Butts said there had been a huge response, at a time when a number of allegations of racism within the game have been reported.

“Since launching part one of our call for evidence we have been inundated with responses,” Butts said.

“More than two thousand people across the country have come forward to share their experiences both through the survey and also by directly reaching out to the ICEC. We anticipate that more and more people will come forward.

“We continue to urge anyone who has experienced discrimination whether that be sexism, elitism or racism, to respond to our call for evidence so we can examine the state of equity in cricket.”